Why the right is bashing “The Muslims Are Coming” 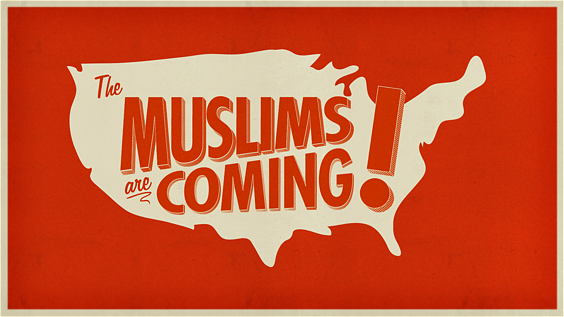 Hide your children. Lock your doors. Discard your alcohol and dispose of your pork “The Muslims Are Coming!”  And here’s the worst part: these dastardly Muslims have camouflaged themselves as comedians in effort to make you like them. But don’t be fooled: They are trying to impose Sharia law, one joke at a time!

That, in a nutshell, is the response of three right-wing media outlets to the new comedy documentary The Muslims Are Coming!, which has not even been released yet. (The film will be released September 24 via iTunes/Amazon and cable VOD and in theaters in select cities.)

The film—I’m the co-director along with Negin Farsad and one of the comedians—has struck fear in the hearts of some on the right. Why?

The people who literally make their living demonizing Muslims by selling books and giving lectures, or politicians who use Muslims as a wedge issue, want you to be angry. They don’t care if it’s angry with Muslims or angry with them. They are like the pink slime in Ghostbusters 2 that needs hate to thrive.

What they don’t want is you laughing at them. That undermines their credibility. And believe me, they are keenly aware of this, which is why we saw Breitbart.com, The Washington Times and Front Page.com launch a preemptive strike against the film with articles attacking it.

But this film is not just about mocking the bigots. (Although I’m happy to hear people laugh at them when they watch the film.) The film’s focus is following a journey of American-Muslim comedians as they perform free comedy shows across the Deep South and West. Our goal was to meet as many of our fellow Americans as possible of all faiths (or no faith) and answer their questions about Muslims and build connections with them.

We didn’t make a Borat type of movie mocking the people we met in our travels.  Instead, we set up an “Ask a Muslim” booth on the streets of Georgia. We bowled with people in Alabama, chatted with others in a coffee shop in Mississippi, and literally hugged people in the streets of Salt Lake City.

So how did the right wing peeps respond? Well, Breitbart.com labeled the film a “Cultural Jihad.” In actuality, I’m kinda excited about this label—most comedians have credits like The Tonight Show or Letterman. I, however, now have the more unique credit of, “Comedy jihadist.”

Front Page’s article purports to be a film review written by an alleged screenwriter. However, the author based the review on watching the three-minute trailer. This guy takes lazy to a new level.

And then there’s The Washington Times. They whine that the movie is just a parade of liberals mocking conservatives. To be honest, they are correct. We do have some great progressive voices in the film including The Daily Show’s Jon Stewart, MSNBC’s Rachel Maddow.  Russell Simmons, Rep. Keith Ellison, and comedians like Lewis Black, David Cross, Janeane Garofalo, etc.

But here’s the thing The Washington Times didn’t include in their article, because they didn’t contact us for a comment: We invited numerous conservatives to be in the film. To be specific, we asked Sean Hannity, Bill O’Reilly, Judge Napolitano, and Pat Robertson through their representatives. We even invited some of the most notorious Muslim haters. (I won’t list their names because they don’t merit the attention.)

One guess how they all responded? They, of course, said no. Why? You have to ask them but it’s clear that many on the right don’t want to be challenged when selling their rancid bill of goods to the public about Muslims.

But here’s the truth that some on the right will hate to hear: We will prevail. And when I say “we,” I don’t mean Muslims. I mean American values.  How can I say that? Our nation’s history makes it clear how this will end for the Muslim bashers.

Past generations have seen Anti-Semitism and anti-Catholicism as part of the mainstream discourse and used by politicians to divide and scare people.  We have also seen some on the right use race and homophobia as part of their political agenda.

But guess what? Over time these efforts have all failed as the voices of tolerance in our nation have always, in time, drowned out the voices of hate and bigotry. That doesn’t mean that racism and bigotry have been eliminated in our country. But it does mean that those voices have increasingly been marginalized to the fringes of American society.

I am fully confident this is the same fate that awaits the Muslim haters.  But that wont happen on it’s own. No, it will take the efforts of a coalition of good people to stand up together. And thankfully we have seen that very thing happening over the past few years. In fact, our film is an example of this, as it features people of different faiths and backgrounds coming together to stand up against hate and for American values.

In time, the bigots who spew hate versus Muslims will be relegated to hanging out with the racists, homophobes, Anti-Semites and other despicable people. However, until that day, I hope you will join me in laughing at them. Because that is truly their greatest fear.

Originally published on The Daily Beast and reprinted on TAM with permission of the author.

SEE ALSO:  The Muslims Are Coming:  Pamela Geller Discovers Comedy Jihad, Sheila Musaji http://theamericanmuslim.org/tam.php/features/articles/the-muslims-are-coming-pamela-geller-discovers-comedy-jihad/0020021  (links to many articles about the history of the making of this comedy documentary).